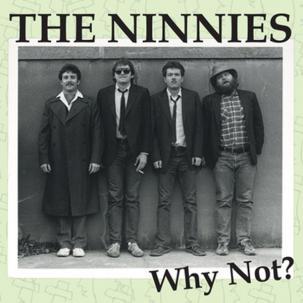 The Ninnies
Why Not? (CD)

THE NINNIES were a bouncy powerpop/ROCK band from the far Northwest Chicago suburb of Mundelein, IL. They weren't trying to be the next CHEAP TRICK like so many others around that area in those days. Instead they were just a group of drinking buddies playing music for fun. THE NINNIES never even really tried to be part of the Chicago scene. Instead, they stayed in Mundelein and ruled backyard parties and the local bowling alley from 1978-1981.

They released one 45 in 1980 on their own Stupid Records. It didn't have a flashy picture sleeve and was mostly unknown to Punk and powerpop collectors until a member of the band launched a NINNIES website with a bit of info and a few pictures. When three members of the band were featured on the St. Louis based "Scene of the Crime" radio show in 2008, the renewed interest in the band sparked an idea to collect the band's recordings before the tapes rotted completely.

The "Why Not?" CD collects the entire seven song studio session that produced the original 45, rehearsal demos, live tracks and more! All original material, recorded 1979-1980. Classic photos of the band are included along with new liner notes by bass player John Azzato (aka Johnny A). The source tapes were far from perfect, but it've done everything possible to enhance their audio quality. Mid-to-lo fi fun is to be expected!