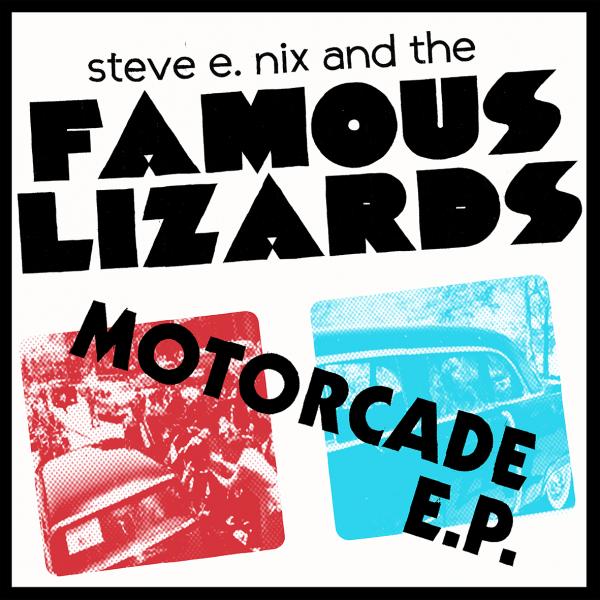 Feat. members of THE BRIEFS! STEVE E. NIX & THE FAMOUS LIZARDS are a new four-piece group led by guitarist/singer Steve E. Nix (from legendary Seattle punk band THE BRIEFS). Accompanying him as THE FAMOUS LIZARDS are bassist Kicks (also from THE BRIEFS), guitarist Emi Pop and drummer Miles Freeborn. "The Motorcade EP" is the band's debut release. Available on a limited edition black vinyl 7", it features four killer pop-punk tracks, just what you'd expect from the prolific pen of Steve E. Nix.

"I'm a punk rocker who loves guitars and interesting songs. I really like The Godfathers" says Steve. Steve has been putting out quality underground music since 2000 when THE BRIEFS released their first single "Poor And Weird". After four albums, a slew of singles and relentless touring, THE BRIEFS took a well-earned hiatus. Never one to stay still for long Steve almost immediately formed and fronted THE CUTE LEPERS. With BRIEFS' bassist Kicks on board and a rotating cast of drummers, guitarists and back-up singers THE CUTE LEPERS continued to tour across the US and Europe and released three albums, all on Damaged Goods Records, along with a bunch of 7" singles. In 2014 THE BRIEFS started touring again and also began work on an album, "Platinum Rats", which was eventually released by Damaged Goods Records in 2019.