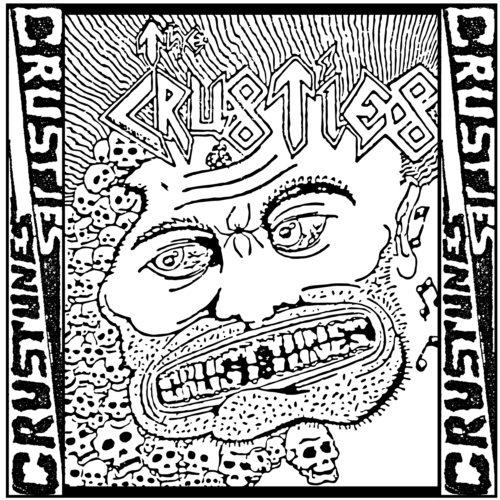 THE CRUSTIES are a legendary, extremely tight, early/mid 80's, Milwaukee WI based band known for playing fast aggressive hardcore putting their own take on how it should be played. Their music pushes hardcore past the limits, and expands upon what most bands bands were doing at that time. They integrated interesting guitar parts along with super-swift tempo changes and stops. They threw in an occasional trumpet riff along with overt and aggressive jazz influences. It all combined to make up one of the fastest playing and musically unique bands, ever.

Every time they played, it was obvious these guys were having a blast, but they took these songs (and their musicianship) very seriously. Practicing several times a week was not uncommon for these guys. Neither was their singers propensity for blowing giant balls of fire out of his mouth at shows!

From 1984 until 1987 THE CRUSTIES played any number of shows in their hometown of Milwaukee, as well as many neighboring states. They even got a few tours under their belts, traveling the Midwest and Southern United States. They opened for legendary bands like THE CIRCLE JERKS, MEAT PUPPETS, HUSKER DU, SAM HAIN, MDC, SUICIDAL TENDENCIES, along with MOTORHEAD and THE BODEANS.

After THE CRUSTIES opened up for THE DEAD KENNEDY'S Jello Biafra remarked how THE CRUSTIES were a breath of fresh air. In 1987, with their singer moving to Austin TX, THE CRUSTIES went on hiatus. They managed to get together once a year to do play shows, when their singer would come back to visit. So they never really broke up.

And now, Beer City brings you THE CRUSTIES on their first and only full length album: THE CRUSTIES - CRUSTUNES. This is a limited edition, completely restored and remastered RSD 2016 reissue. After being out of print for nearly 30 years this legendary gem will finally be reissued for the first time on vinyl, to the delight of many fans world-wide!

This release contains 16 tracks of fast aggressive, unique music that will leave you begging for more, and wishing you could witness the live carnage of THE CRUSTIES! Not only has the audio been completely restored and re-mastered, but this release also contains a brand new inner sleeve, complete with lyrics and flyers! To top it all off, this is a limited to 1000 copies on translucent red vinyl.

A1. Wastefull Goodbye
A2. Raped Eyes
A3. Dont You Think
A4. Horton Hears A Who
A5. Your Own Words
A6. Chainsaw Horror
A7. Blood From A SkullCap
A8. Knock 2X
B1. Ratz
B2. Dairyland Youth
B3. Little Fish-Big Pond
B4. K-9 Cadaver/Final Regret
B5. Blue Light Special
B6. This Planet For Rent
B7. Sloppy Seconds
B8. Whiney Baby Buttwipe