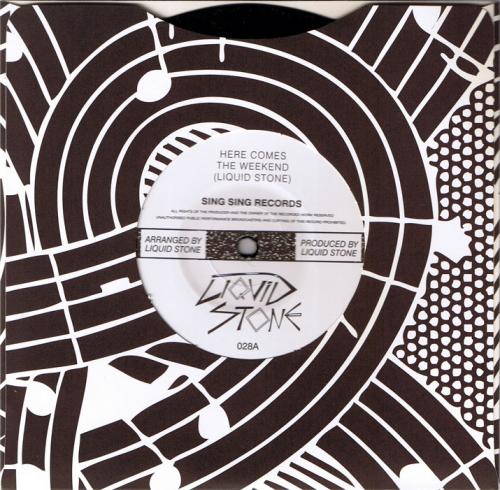 Liquid Stone
Here Comes The Weekend / Because Of You (7")

From the small town of Buckingham, 60 miles north of London, Liquid Stone was a four piece band that was formed by Ronni, Mick and Muz in the mid Seventies . Various line-ups centred around the key member, Ronni Sunderland (vocals and rhythm guitar) and Mick Prod (backing vocals and lead guitar) but it reached the pinnicle of its career in May 1980 with Ian (Muz) Murray on Bass (also vocals) and Ian (Tanner) Tansley on drums . After supporting the UK SUBS at 'Friars' in Aylesbury, the Subs were so impressed they asked Liquid Stone to accompany them on their 'Brand New Age' tour of the UK and in May 1980 the two bands toured the country playing to audiences from St Austell to Hull and culminating in a gig at the famous Rainbow Theatre in London.

The band were well known for their energetic and professional performances. Always a crowd pleaser, Liquid Stone decided to cut their one and only single, 'Here Comes the Weekend' in 1979. All still teenagers at the time the band made their way North to Red Ball Studios in Market Drayton to lay down the tracks but it wasn't until 1981 that the single was formally released. This didn't stop the band topping the offical 'Oi!' charts in 1980 with a live recording of the tracks. Liquid Stone continued to rock clubs and venues around London for the next couple of years and all the members are still playing today.

**The original release was issued without artwork. The reissue comes housed in a Sing Sing Records company sleeve.