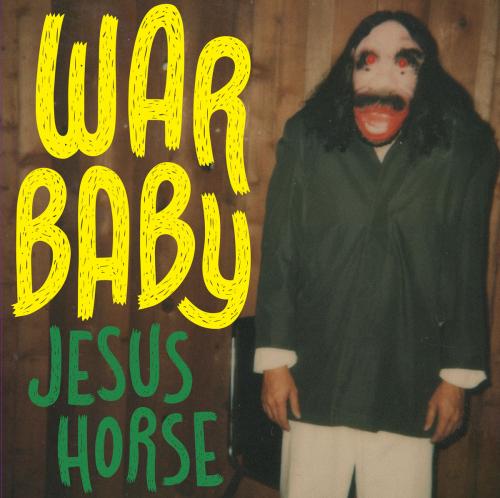 This record smells like sweat-soaked lumberjack shirts at a small club in Seattle in the late 80s and early 90s. But make no mistake, this is now! And WAR BABY from Vancouver present a debut record that functions perfectly as the soundtrack to the soon-to-come revival of the kind of noisy Guitar-Rock that was later labeled as "Grunge" by some cheap media whores smelling the green and milking the scene.

"Jesus Horse" is so authentically in sound and songwriting that it could perfectly be described as the record that NIRVANA never recorded between "Bleach" and "Nevermind". Period!
For the doubters: You really get it all here: Massive and powerful drums, perfect clean/distorted guitar work, cryptic lyrics sung with a laconic, hoarse voice and a fistful of wonderful hits!
Just listen to the opener "Headless Horseman" and you are immediately soaked into another time and place. Hell, this reeks of teen spirit with a mouthful of bleach. The driving bass lines and headbanging choruses of "Dentada", "Queen Bee" and "Melting Wish" seem to be lost "Nevermind" outtakes, there are gloomy and darker songs like "Cave" and "Black Swan" that build up some high tension and explode in the choruses, there are noisier and more Stoner rocking tunes like "Coalmine Canary" and "Frankenstein" and you really won't miss a damn thing that stops you from time traveling back to the day you banged hard to NIRVANA, TAD, MUDHONEY and SCREAMING TREES and spent all your money in the Sub Pop 7'' fanclub.
Recorded with engineer / producer Jordan Koop (PEACE, NU SENSAE, THE MOHAWK LODGE) in the 100 year old heritage building that houses Vancouver Island's The Noise Floor recording studio.