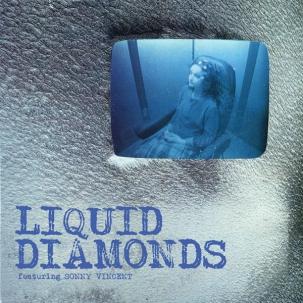 Sonny Vincent (TESTORS, FURY) had another raging proto-punk band before he started TESTORS, and right after FURY called LIQUID DIAMONDS circa 1973, and HoZac has their never-before-released debut Archival 7" released. Another essential piece of the pre-Ramones 70s NYC punk puzzle!

Raw NYC proto punk band, formed by SONNY VINCENT in 1973. An even rawer 3-piece than FURY, this band wasn't as active live but still laid the sickening foundation for what nastiness lay ahead in the primitive TESTORS, undoubtedly already forming in the back of his mind. What we have here waiting for your salivating ears, are the two only-known tracks from the LIQUID DIAMONDS era, a scalding version of the later TESTORS classic "Aw Maw", a full three years before that version, backed with the "Gimme Danger"-tinged "Long Ago", a heavy, low-key jam, sizzling with the burned out ambience of the era just before punk had fully formed. Never before released on ANY FORMAT, these tracks will quickly slip into place alongside pre-punk icons of the era, so while the stream of books & scholars focusing on underground music from this era continuously leave out these missing links of NYC punk history, HoZac offers up another 7" slice of NYC proto punk heaven for you here, so don't even try to relax, crank this up and feel the shell-shock take hold!