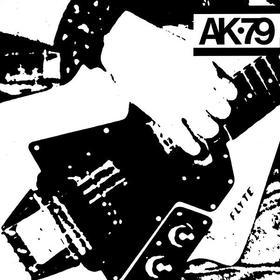 40th Anniversary Edition! The classic New Zealand Punk collection issued on vinyl in its 1993 extended 25 track version for the very first time. The landmark NZ rock'n'roll album from Ripper Records, and reisued on Flying Nun, remastered with a 12-page booklet including essays, liner notes, and histories.

"December 2019 marks the 40 year anniversary of an important record in our lives, AK79. Within the grooves of this historical landmark compilation lies a connection to our musical whakapapa as New Zealanders and music lovers. A defining record, having captured a raw snapshot of the punk subculture in Auckland during the late 70s, this much-loved compilation is a living, breathing statement of what came before today.

To mark this very special occassion, Flying Nun Records pays tribute to those ragged and rambunctious years by presenting AK79 40th Anniversary Edition Reissue, an iconic cornerstone of alternative kiwi rock history with this special anniversary edition. Featuring new liner notes written by Ripper Records' Bryan Staff, the 2019 reissue will feature all songs ever featured on any version of AK79 for a complete look at its recorded history. About AK79 Raw, unfiltered, shambolic madness.

The vision to capture the Auckland scene began with Bryan Staff (Head of Ripper Records and Radio DJ at the time) who saw reason to capture the music coming out of the local punk venues of the time such as Windsor Castle and Zwines. Originally released by Ripper Records in December 1979, bands that featured on the original pressing included THE SWINGERS, THE SCAVENGERS, THE PRIMMERS, PROUD SCUM, TOY LOVE and THE TERRORWAYS. The musical movement captured on record was an abrasive, empowered response to the overindulgent progressive rock and glam era of the 70s. The initial pressing, with its iconic black and white cover designed by Terence Hogan was limited to 500 copies, to be later reissued on vinyl and cassette through CBS.

During the 40 years since AK79's first release, the record took on a life of its own. Those original 500 pressings became a rare and coveted collectors item, and somewhat of an "urban myth" on the vinyl market. So the story goes, when the original master recordings of AK79 were discarded in 1982, it only created further demand for this enigmatic record. Responding to the call, an expanded version of AK79 arose, released on CD by Simon Grigg and Roger Shepherd as a joint release by Propeller Records and Flying Nun Records in 1993. This time there were some late additions, including tracks from THE SUBURBAN REPTILES, THE SPELLING MISTAKES, THE FEATURES and THE MARCHING GIRLS, along with additional tracks from the original bands on the first pressing.

This particular reissue was remastered and mixed by Grigg, and came bundled with additional liner notes by Grigg, Staff and THE TERRORWAYS' own Kerry Buchanan. In November 2008, a bootlegged 2 LP version would come to life for a very special reunion gig in Auckland which involved THE SCAVENGERS, THE SPELLING MISTAKES and the first performances from THE TERRORWAYS and PROUD SCUM since 1980 in a rare event. At the time, it was sold at the show with unreleased tracks and a 20-page booklet. Six years later, the AK79 compilation was honoured in its many forms with the IMNZ Classic Record award, presented at the Taite Music Prize ceremony. 40 years on, the spirit of the AK79 still packs a punch and the feeling captured in these recordings are as relevant as ever."