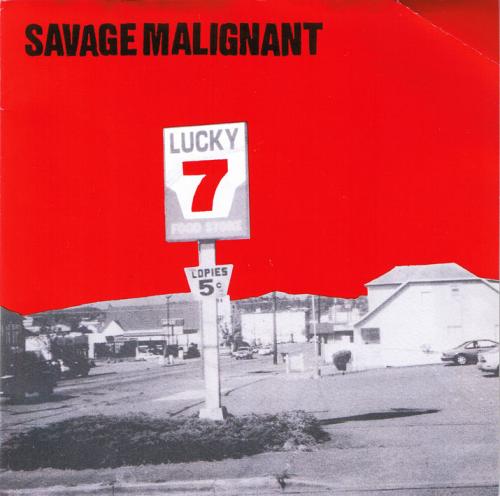 Wild guitar/drum duo from Gt. Missenden, UK. This record, from 1997, was Savage Malignant's first and last release. Shame - it was a good one!

"SAVAGE MALIGNANT was a band comprising twin brothers Savage Ben (guitar and vocals) and The Maimer (drums/vocals). SAVAGE existed between 1995 and 1998 and released one EP 7" called "Lucky 7" which was on WRENCH REOCRDS of London. That record was made at TOE RAG before they moved the studio from the now, ever so trendy, Hoxton, and before bands like The White Stripes and The Kills were recording there, thus making it "uber cool". SAVAGE MALIGNANT played some shows in London, a few in Europe and some on the West Coast of the USA. Our sound was very furious, a blast of very fast surf/garage rock with very screaming vocals, the songs were very short. There were some good times and bad times. We often had to play on faulty equipment, which mislead people into believing we couldnt play our instruments, which was half true anyway. SAVAGE MALIGNANT lives on in the hearts of many. If anybody out there has any recordings of us or pictures could you please send them to us, i know we were recorded on a couple of US college stations." (Savage Malignant / www.myspace.com/savagemalignant)