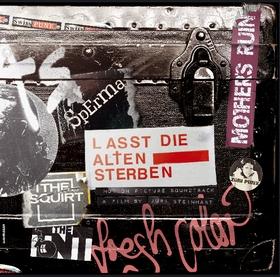 Obviously, the SWISS Punk & Wave releases from the 1970s and, partly also from the 1980s, are of great international renown among aficionados. The title track of the movie is "I Think I Should Stop To Talk" and was recorded in a contemporary as well as a Punk version by FLURIN GIGER. Most of the other tracks on the record are Swiss Old School Punk & Wave classics! Veritable milestones from the pioneering days are ""Hot Love by the NASAL BOYS and "Impossibilities" by THE BASTARDS. Furthermore, two absolute favourites by MOTHER'S RUIN: "Danny Hot Dog" and "Godzilla". Both are songs from records that have been waiting an eternity for a full re-release, just like the howler "No More Love" by SPERMA. Previously already newly mastered are "I've Gotta Whole Lotta Love" by Rudolph Dietrich's Band KRAFT DURCH FREUDE and "Razzia" by TNT. On the other hand, VORWÄRTS distinguishes itself as the only band still active and is represented on this record with their original stunner "TV Generation". The songs "La Serveuse" by SIDA und "Last Chance" by THE SQUIRT are, in contrast, from Punk bands that had not formed before the 1980s. Also, prior to this release there was little known about these two bands because they haven't been documented in any manner before. As bonus Tracks that don't appear in the movie, the two crackers "Cry For Fame" by DIETER MEIER (Yello) with FRESH COLOR and "The Source" by FRESH COLOR were pressed on this record the first time on vinyl since their release in 1978. Includes gatefoldcover, 16 page Fanzine and the movie Poster!