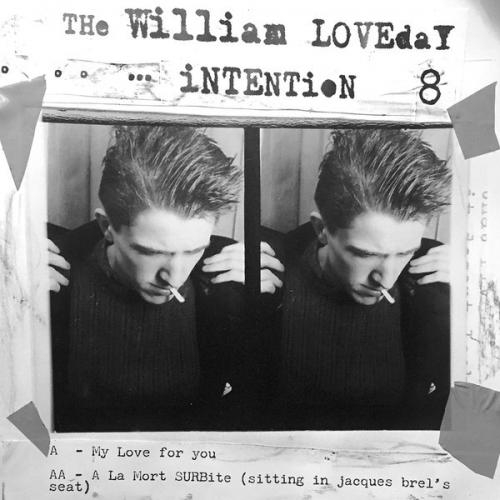 THE WILLIAM LOVEDAY INTENTION - Why the new band name?

"Because it's William Loveday's group - they are a new band (nothing to do with BILLY CHILDISH)".

The new version of "My Love for you" has a spaghetti western/ENNIO MORRICONE feel. Were those classic western films and soundtracks an inspiration for you growing up?

"The young William Loveday did see those movies on release as his father was a fan and took him along to see them. William himself was never a great fan, but it seems that something left a stain on his consciousness."

Julie does a great job with the vocal on this one. Are there any more unreleased Julie vocals in the vaults?

"There are one or two other songs that J.W. Loveday has sung on - but she is hard a hard girl to nail down."

Who played the brass on the recording?

"Tom Morley is the trumpet player for the William Loveday Intention."

"A La Mort Surbite (sitting in Jacques Brel's Seat)"" is the single's other song, what inspired the lyrics for it?

"William Loveday's many visits to Belgium in the 1980s to see his love interest (who was flemish). This song is about the bar A La Mort Surbite (the Sudden Death) in Brussels were they would often go to drink."

A. My Love For You
AA. A La Mort Surbite (Sitting In Jacques Brel's Seat)